At first I didn't know that my left knee was going to have a new message, I just knew that I was super motivated to do an intensive detoxification cure - with the goal of lasting rejuvenation and recovery.

Rejuvenation and health has become my power goal. And this topic - combined with the knowledge of the power of thoughts - is exciting enough for me to share it publicly. That is why I am making this blog available.

I am sharing my path of healing in extracts here precisely because it is a path of recognizing and accepting one's own mistakes. It leads me away from judging to loving acceptance. And it leads me to let go of everything that seems to block me.

At the beginning of the 90's, 3 serious accidents in the construction industry shortly after each other caused me to put the learned carpentry craft to rest and to take new paths towards medicine.

A thick knee opens up worlds unknown to me

My path into the healing vocation has obviously been largely self-exploration and truth finding over a number of years. Some times I could help people and also animals with Spiritual Healing really effectively to find healing. These experiences in particular encouraged me again and again to stay on the ball. Furthermore, I experienced in myself a wider range of conditions such as depression, helper syndrome, would-be world saviour, self-doubt, until one day my left knee got thick and stopped me in my activities permanently.

Immediately it was clear to me that I had to go inward here. Through the expert guidance of a very gifted alternative practitioner, a severe childhood trauma came to light. I had not expected this at all. The feelings frozen in my body thawed out and I was able to successfully let them go. The knee healed quite quickly!

I was in a kind of awakening mood - my right knee got fat. Again I felt stopped. In the course of a training for "Emotional- and Bodywork" I was able to find a surprising resolution on the mental level: During the bodywork there was a wrestling match with my companion. In the middle of the fight I suddenly realized: I HAVE NO LUST TO FIGHT MORE!

In this moment a stream of light flooded through me, which connected me directly with the divine. The realization: As soon as I stop fighting against a part of life and affirm life completely, connection is there. The old rebel in me could now accept this on a deeper level.
The knee, which was still very swollen and painful during the session, improved immediately, and that same evening I was able to dance freely!

All good things come in threes?

Four years later - again I was in a mood of departure, inspired with new impulses - the right knee became thick again. This time also for almost 4 months. My already practiced approach - soul work - did not really work out. After all I had a lot of time and used it to study A Course in Miracles intensively.
When the appointment with a psychotherapist fell through, I intuitively decided to let it all go and not try anything more toward healing. Instead, I affirmed a guiding principle in the Course in Miracles: Only God's plan of salvation will work! I simply let myself now trustingly surrender to the Divine Healing Power.
And lo and behold, the next day I first felt an incredibly intense peace, and from the day after next the knee swelled quite rapidly. After another day I could risk a first dance and the healing continued!

On vacation, which I enjoyed a little later on Lanzarote, knee pain still flared up occasionally, until I was faced with a surprisingly clear inner decision: Do I believe in LOVE as the strongest power in the universe, or do I believe in self-will? Love and self-will were embodied here - inspired by the reading of Dostoyevsky's "Grand Inquisitor" - by Jesus and Lucifer respectively.

Immediately after my decision for LOVE, the knee was completely healthy!

What my knee teaches me

While I - it's been over two years now - am preparing this blog for rejuvenation and health and writing the first articles in my mind, my left knee is getting fat!
Shortly before the start of a construction project in which I am supervising the building of a wooden playhouse for children, I am stopped in my swing again.
At first I am puzzled as to why this is happening now. A consequence of perhaps excessive purification? Some kind of destructive pattern that always becomes active when I am in an exciting mood of departure?

Once again, I clearly feel an inner voice that makes it clear to me that instead of continued manual activity, something else really has to start now. Only what?
The next day I clearly receive the thought: Rainer, the law of karma or fate is absolutely just.
And right after that I feel an image of abuse of power rising up in me, in which I prevent other souls from their self-expression. I have to cry immediately and know: this is no imagination now. Here a cause emerges whose effect I have been experiencing for years:
Despite many events showing me that manual work is no longer in order, I did not positively find my self-expression! Instead, I felt compelled to fall back again and again on the craft I had learned.

A few months later I am able to free myself from this "karmic legacy" with the help of a Clearing .

The knee is OK again. It has successfully delivered its message, unlike the Cross problems, which have accompanied me for several months. The healing process is not yet complete.

It is a path on which lie old and new tasks.

Know thyself! - This has been my central guiding principle for a long time. We free ourselves from all judgments and projections. And we allow each other, to just Be.

I love living for the critical mass of liberated and awakened people to be reached, and for the collective Unfolding our true divine being! 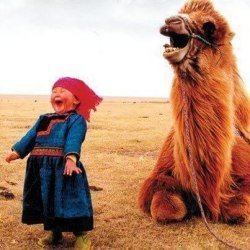 The purpose of life is exploration.
Adventure. Learning. Fun.
And one more step home. 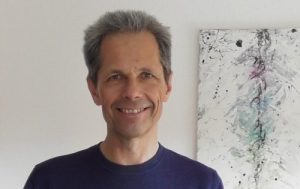 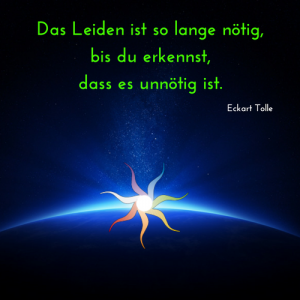 In the now there are no problems

In the now, there are no problems and therefore no disease. Your belief in the name someone gives to your condition keeps the condition alive, turning a temporary imbalance into a seemingly solid reality. This gives it not only reality and solidity, but also a continuity in time that it did not have before.

Eckart Tolle, The Power Of NOW!

Look!
You have become the light,
you have become the clay,
you are your master and your god.
You Yourself are the goal of your search:
the ever-sounding VOICE,
that echoes through eternities,
freed from changeability,
free from sin,
the seven tones united to
VOICE OF SILENCE.