I am a free being and subject to no one.

More and more blatantly, "forced vaccination" is being talked about. I never agree to such arbitrary measures. Neither today nor in the future. Because I am a free human being and subject to nobody. I am not subject to any laws except the laws of our Creator. In no case I let myself be ruled by an "admiral law".

Meanwhile, it is becoming increasingly clear that the "Vaccinations" are extremely often pathogenic and in the end even fatal.
And not infrequently already directly after the so-called "vaccination", which is actually a poisoning gene manipulation and implantation of nanoparticles.
These particles create digital structures in the body to enable external control.

Already developed and patented before 2019

While the existence of a natural "corona-Virus" could never be proven, at least the "vaccines" are nothing else than gene-manipulating genocidal weapons against mankind. They were developed and patented long before the Corona "outbreak".
And no, there are also no "variants", neither with nor without Greek Letters.

Here is the watertight evidence:
In the video "73 patents on SARS-COV-2 as early as 2019" in the sidebar of this page, Dr. David Martin proves precisely in detail all connections, to the planned production of both artificial "SARS viruses" and of genetically manipulating "vaccines".

An immediate turn away from this aberration is, in my opinion, urgently needed.
Well-tried medicinesand protocols already exist which, in contrast to "vaccinations", have a healing effect and do not weaken the natural immune defense.

I think it's very important to publicly refuse to agree to any arbitrary measures now.

Most people still believe in the "virus" theory. The mental causes of "disease" they have not yet in the field of vision. Also, the wonderful body intelligence that provides detoxification with "flu", for example, is unfortunately still too little understood.

Therefore, these people need conventional drugs that they can trust.

Almost every day we now receive reports that clearly show that there are extremely successful, simple treatment methods for "COVID".
These have also long been used in some countries:
The Japanese recognized the vaccination madness at some point and consequently stopped. Since then they treat very successfully with Ivermectin. There are virtually no more C diseases.

So not all governments are equally corrupt as for example the German one.

Some countries are successfully foregoing "vaccinations."

" most African countries avoid the vaccination program of the globalists and deliberately rely on other treatments.
Result: complete success, hardly any deaths, in contrast to the countries that rely on "vaccination", driven by an insane agenda.

In the region Uttar Pradesh in India, C. has also disappeared, mainly with the help of ivermectin.

On the other hand, it has become more than clear that the number of diseases and deaths in the countries with the highest vaccination rate  highest at the same time: e.g. in Gibraltar and Israel.

These figures are very slowly reaching even the mainstream media, which have so far rigorously covered up the truth.

Main and side effects worldwide

And anyone who now tries to get information about the devastating effects of the "vaccines" beyond the mainstream media will find it pretty quickly:

A hard-to-miss number of Pilots and Professional athletes suffer spontaneous death, even if they were previously completely healthy.

Also significant is the starkly high number of stillbirths among vaccinated pregnant women. In one canadian clinic e.g. 13 stillbirths within 24h.

The official main intention to make people immune against "COVID" by "vaccination" is rapidly turning into the opposite. More and more people are dying, the rest are even more susceptible to contracting C, and they can continue to spread the toxins.

What does the Nuremberg Code say?

The Nuremberg Code of 1947 was introduced as a result of the terrible human experiments in the "Third Reich" and has since been valid and binding worldwide. Its main purpose is to prevent people from being subjected to coercive and misleading medical experiments that lead to their death or to a deterioration of their health. 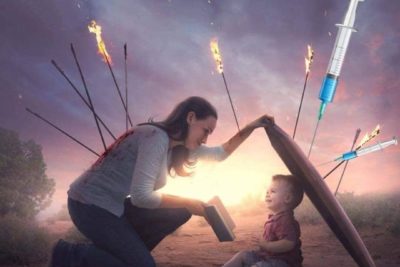 Already now, a situation can be clearly identified worldwide where several provisions of the Nuremberg Code are knowingly and intentionally violated.

There are currently only a few governments that base their actions on the welfare of the people. These include Japan, many African states and also India, at least predominantly, as well as the U.S. states of Florida and South Dakota.

All collaborators, be they politicians, journalists, lawyers, doctors, CEOs or other individuals involved, will probably soon have to answer to special tribunals for premeditated genocide.
This is not an exaggeration, nor is it a figment of my imagination.
A year ago, concerned critical people were already warning that governments even wanted to introduce "compulsory vaccinations."
As usual, they were defamed as "conspiracy theorists" who fabricate absurd "swear words".
Today, this coercive measure is discussed almost daily and is already part of government programs. A look at Austria and especially Australia shows what this can look like.

In Australia aborigines are currently being rounded up and force-vaccinated in their town. It's creepy.

30 reasons not to agree

1. the survival rate of "Covid" is over 99 %.
2. there has been NO unusual excess mortality.
3. the number of "covid deaths" is artificially inflated.
4. the vast majority of covid deaths have serious comorbidities.
5. the average age at "covid death" is higher than the average life expectancy.
6. the Covid mortality curve closely mirrors the natural mortality curve.
7. the use of "unlawful" living wills has increased massively.
8. lockdowns do not prevent the spread of disease.
9. lockdowns kill people.
10. hospitals were never unusually overloaded.
11. PCR tests were not developed for the diagnosis of disease.
13. the CT values of the PCR tests are too high.
14. the WHO has admitted 2x that PCR tests give false-positive results.
15. the scientific basis for covid tests is questionable.
16. the majority of covid infections are "asymptomatic".
17. there is very little evidence to support the alleged risk of "asymptomatic transmission."
18. ventilation is NOT a treatment for respiratory viruses.
19. ventilators have killed people.
20. masks do not work.
21. masks are bad for your health.
22. masks are bad for the planet.
23. covid "vaccines" are an absolute novelty.
24. vaccines do not confer immunity and do not prevent transmission.
25. vaccines were developed in a hurry and have unknown long-term effects.
26. vaccine manufacturers have been granted immunity from suit if they cause harm.
27. the EU prepared "vaccination passports" at least one year before the start of the pandemic.
28. a "training exercise" predicted the pandemic just weeks before it broke out.
29. flu has "disappeared" since the beginning of 2020.
30. the elite made a fortune from the pandemic.

Grassroots movement: There is a ferment among the people.

While the spiritual and patriotic movement against the globalist dark elite has already picked up plenty of steam in the U.S., things have unfortunately looked very bleak in Germany so far.
Meanwhile, beyond our borders, we see Italians, English, Romanians, Poles, Croats and French taking to the streets en masse and again every week. In this way, they are showing that they do not agree with the dictatorial measures.

Quite a few here in Germany - and abroad - are very concerned that the Germans have learned nothing, absolutely nothing, from the events of the 1930s.

On the other hand, the Plandemie was initially successful in ensuring that joint resistance meetings became very difficult.

Rome is not omnipotent.

The good news is that local resistance circles are now springing up like mushrooms across the battered republic. They give themselves imaginative names like "Jab-Free" or "Gallic Village" (Asterix-comic).

Ingenious people created these new circles after the noticeable failure of central demonstrations.
People are coming together to lovingly support each other, to reclaim the fundamental right of freedom, to give each other more courage, to find responsible doctors and lawyers, and to revive direct human interaction.
For weeks now, so-called Monday demonstrations or walks have been taking place throughout the republic. From week to week there are more and more.

And it has long since also been about joint positive Visions for a politician- and party-free peaceful world, in which we can live healthy and in freedom as well as in divine fullness.

Just as the odds of recovery for "Covid" are 99.95 %, we can also expect to leave the dark valley of collective fear-mongering behind us for good very soon.

My intuition still tells me that very clearly, even though I was wrong about the timeline last year.
At least 2 factors ensure the final and complete overcoming of the dark elite:

What is it about now?

The duality of good and evil, often perceived as cruel, ensured that we attain an individual divine self-consciousness. We were a "god in diapers" and are now gradually on the threshold of inheriting our divine heritage.
By letting go of our fears and stopping delegating our share of responsibility to corrupt politicians, we grow up as social beings. 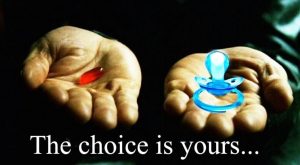 Connected in the morphogenetic field the few awakened ones help the many still sleeping ones to wake up from the permanent hypnosis. We offer them at least the red pill of truth (>image from the Matrix movie).

You and I, together, in the full consciousness of a liberated and awakened human being, can refuse to consent to the Dark Agenda.
And we can instead create a world together from now on, where we are truly free.
Free from enslavement and oppression, free from deficiency and artificially created poverty, free from disease and crime.

We can engage in the love that our Creator has for everything. This love will inspire us. We fly together from the valley of fear into the garden of freedom.

Control on the train

At Corona Committee Dr. David E. Martin (M-CAM International) explains on the basis of a collection of documents how patents have already been granted for all important genetic parts of the so-called "noval virus" SARS-CoV-2 years before the outbreak of the so-called pandemic in 2019.

In the English video you will learn the origin of ivermectin and examples of its beneficial effects. If the YT link no longer works, click on the link from redvoicemedia.

Romania's most famous soccer team, Steaua Bucharest, announces a ban on all BANNED players because these athletes "lose power."

75 athletes in Germany alone have died directly after vaccination, often while actively on the playing field or athletic field.

Details can be found in this english video.

To view please just click on the small arrow on the left.

US patents for "viruses

An easy to understand 20 min video in English that challenges the virus theory:

Politicians should wear sponsor jackets like the racing drivers, then we know who owns them. 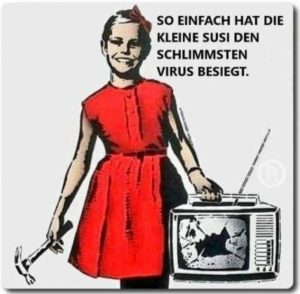 TAYLOR - Think for yourself!

Q - The plan to save the world

This video contains an accentuated summary of the world political situation and the Plan "Q" the Alliance, save the world.

You can find the original video here.